98 players forming 23 teams showed up for this year's edition of the US Amateur Team North held at the wonderful Crowne Plaza Hotel in Milwaukee. The spacious and nouveau hotel was an excellent upgrade for the event held by Alex Betaneli and Ashish. 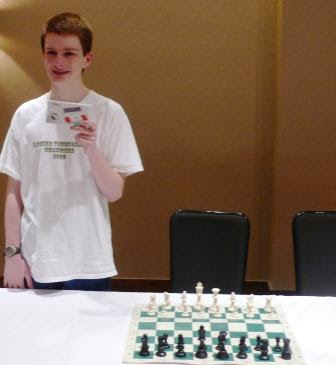 The fun filled tournament was TDed by none other than the Blaze's own Manager Glenn "all star" Panner. The strong tournament was won by a team lead by Blaze superstar player IM Angelo Young. His team, "Pinoy Chicago Chess Team," went undefeated for a 4.5/5 score to clinch first. The event featured none other than two GMs (Dmitry Gurevich and Alex Yermolinsky) and a total of 11 masters! Still the biggest news of the event had to be that the tournament would end with 12 masters.

The newest IL master was minted in the USAT North, none other than the Blaze's own: Trevor Magness! Trevor put up a tremendous 5/5 score on board 1 to score his new 2208 National Master rating! His biggest upset had to be his round 1 victory over seasoned GM Alex Yermolinsky. Here is Trevor's excellent analysis on his game with GM Alex Yermolinsky.

Posted by Tom Panelas at 10:19 PM No comments: Links to this post