USCL to Get $80 Billion from Obama Stimulus

The United States Chess League will get $80 billion, more than ten percent of the $787 billion chess stimulus package unveiled today by the White House.

The massive chess stimulus package, designed to jump-start the economy by injecting an infusion of purchasing power into chess in the United States, will bring about a large-scale chess renaissance in America by providing major resources for the cash-strapped game. 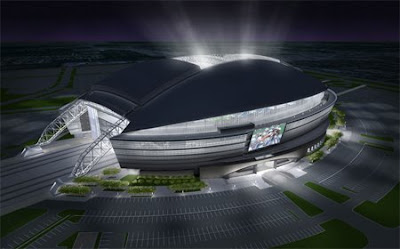 An artist's rendition of the proposed Blaze Arena, as it will look during Wednesday night matches
As part of the plan, the USCL will receive tens of billions of dollars that will allow the league to expand across the country, pay players huge salaries, and move into cushy and cavernous playing venues.

“The U.S. Chess League is a beacon of principled, sportsmanlike competition in a world of professional sports plagued by spoiled athletes and steroid scandals,” said President Barack Obama. “It’s time we recognized that and helped the league get to the next level.”

“I’m not even sure what we’re going to do with all the money,” said USCL Commissioner IM Greg Shahade from his new corner office on the 60th floor of One USCL Plaza on New York’s Fifth Avenue.

Some of the money has been allotted, however. Each current team in the league will receive several billion dollars for player salaries and to erect suitable new facilities. The Chicago Blaze, which was tipped off about the coming windfall by its Chicago contacts in the administration, sent out a request for proposals earlier to the city’s leading architecture firms and has accepted one from Skidmore, Owings & Merrill LLP for a massive indoor-outdoor stadium to be built just west of the Loop.

In order to fill the stadium during Blaze matches, the team will pay fans $100 each to attend. Top kibitzers will get an additional bonus.

Finally, the league’s Blogger of the Year award, previously $100, will now be increased to one million dollars.
Posted by Tom Panelas at 12:53 PM 1 comment: Links to this post